When I tasted my Trois pale ale (/white IPA /session IPA), brewed last fall with White Lab's new Brettanomyces Bruxellensis Trois, I knew at once that this would be a yeast strain that I would brew many a hoppy beer with. It seemed obvious immediately that it an imperial IPA with a huge dose of new-school hops was the next thing on the agenda for my reserve of Trois. How could that possibly not be awesome? It was only a matter of making room on my brewing calendar for it. The idea here was to take the super-insane tropical fruit character of Trois and pair it with the exotic tropical hoppiness of New Zealand hops, because... obviously.

I try to restrain myself in my brewing schedule, and maintain some variety, or else every beer I brewed would be either hoppy or Bretty or both. (Although that's still pretty much true). It required some extreme patience to put this batch off for a couple months. Based on the pure on-paper potential and my inherent bias toward everything going into this beer, I figured it would have to be one of the best batches I ever brewed, or else I seriously screwed up. I try to be a harsh critic of my own work, but the result doesn't disappoint — this is a tasty beer. Perfect? No. As usual, I have a couple ideas for improvement, but there's no way I won't be brewing a beer like this on a regular basis. If I ever have a brewery, it would be a flagship — particularly because there are hardly any breweries doing anything like it. (The closest commercial beer that I've seen to this is Evil Twin's Femme Fatale Blanc, although that leans much more heavily on a phenolic, earthy yeast character).

Trois is something; there's really no other yeast like it that I've experienced. I expect we're entering a new world of flavor from isolated Brett strains, and Trois — being distributed year round by White Labs, now — is a shining example of whats to come. My only complaint about it is that it may actually over-shadow hop character a bit. It's hard to tell where the hops begin and the yeast leaves off, but there's not quite the subtle nuance here that I get in some tremendously hoppy imperial IPAs. Rather than tremendously hoppy, this leans more towards balanced — it's big, and really dense with flavor, but the wallop of fruitiness smooths out the bitterness and makes this incredibly drinkable. A healthy dose of Nelson Sauvin makes itself known in the aroma, while the huge tropical flavor is dominated almost entirely by Trois. It's a very different sort of profile from your typical big IPA. Brett Trois is pure fruit, over-ripe and succulent, like the flesh of guava, wild berries and grapefruit mashed together — tart and raw and thick with character.

New Zealand hops, while flavorful and all-around delightful, may almost be too nuanced to make up the entirety of this hop bill — I'm thinking next time I brew this I will use some danker, more aggressive varieties, to see how that goes. This time, though, I tossed in a big varied dose of Wakatu, Pacific Gem, Nelson and Citra (since I didn't have Galaxy), and the only hop that really, specifically jumps out at me is Nelson, along with maybe some Citra. A more limited combo of Nelson Sauvin, Citra and Columbus should be good, to focus on a combo of dankness and fruitiness, and I'm guessing Mosaic would pair very nice as well. I actually threw an ounce of Mosaic into the dry hop, but there's no way I could pick it out from this dense medley. Really though, almost any sort of hop character should pair with Trois for an IPA... depending what you're going for. Want to accentuate the fruitiness? Hit it with a bunch of like-minded hops. Want to create something one-of-a-kind and super multi-dimensional? Hit it with hops that contrast Trois' fruit character and balance things out.

I treated my water fairly conservatively with this one, and as a result, it's rather soft, with a gentle bitterness. I would maybe like it a bit more offensive, personally, being that this is an imperial IPA — and I'd be brewing smaller Brett IPAs to cover the "less aggressive" spectrum. Still, the easy-drinking, less-aggressive character of this is certainly nice in its own way, and has made it very popular amongst friends that "don't usually like IPAs," as well as those who do. I've had very enthusiastic responses to Bewilderment, but being the super critical self-analyzer that I am, I know it can still be better. For the amount of hops I used, I expected a bigger, more layered hop aroma — Trois imparts a fantastic, potent aroma on its own, but I don't want to to entirely dominate that of the hops. My dry-hopping technique has for a while been one area of brewing I'd like to perfect, and I'm still not there.  With this batch, I used a two-stage dry hop addition, but only left the second stage in for a little under 2 days, which was probably not enough time.  Under perfect conditions, full dry hop aroma can be extracted under 24 hours, but I know that my brewing setup is not creating perfect conditions at the moment. But other than those few quips, this is already a damn tasty beer that I am rapidly plowing through. It's hard to be critical of something so enjoyable.

Of course, those improvements don't take into account the experimentation I have yet to run on Trois. How does temp affect the resulting character from the yeast? Would fermenting this at a different temp, or with a different pitching rate or aeration technique, affect how sweet or dry or fruity or clean it comes across? I'd be interested to hear other's results, if you think you've gotten a handle on Trois' pitching variations. 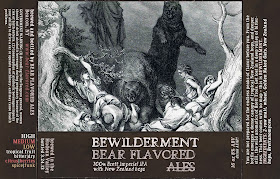